Morrison Scotch Whisky Distillers is the continuation of the Scottish family business Morris and MacKay, but then without MacKay. Based in Perth, Scotland, the company not only focuses on whisky bottling, but also on whisky blending and liqueur making. Their blends are released under the Old Perth label, their single malt bottlings are released under the Càrn Mòr label. And since 2017, they also have their own Aberargie distillery. 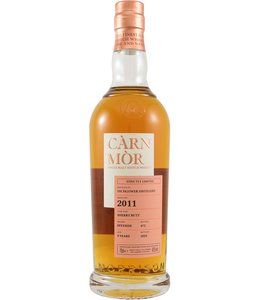 This Inchgower, a Speyside single malt whisky, is released in the Càrn Mòr Strictly Limited series. And indeed, it is a single cask bottling that yielded 672 bottles. The Inchgower matured for 9 years in a large sherry cask, and is bottled at 47.5% ABV.

€57,00
By using our website, you agree to the use of cookies. These cookies help us understand how customers arrive at and use our site and help us make improvements. Hide this message More on cookies »