Single Note is the brand under which Dutch Rick van Diepen is bottling single malt and single grain whisky since 2020. He entered the whisky world through an exchange program with the University of Edinburgh in 2005. He became a member of that university's whisky society and as such he visited Scotch whisky distilleries. Eventually he even came to work in the whisky world. And, as said,  since 2020 for himself, as an independent bottler, where his relationships from previous years come in handy. The name Single Note refers to his other passion: jazz. As with whisky every cask and glass, with jazz every note is a surprise. 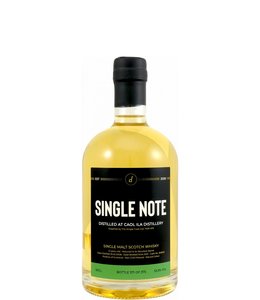 €78,00
New in our shop: bottles from the new bottler Single Note, founded by Dutchman Rick van Diepen. This
By using our website, you agree to the use of cookies. These cookies help us understand how customers arrive at and use our site and help us make improvements. Hide this message More on cookies »