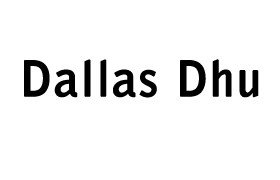 Dallas Dhu, built in Speyside just in the 19th century, is such a Scottish distillery with a history of owner changes, fires, expansions, 'mothball periods' and finally closing (1983) and final ending (1992). Only the name is still buzzing around. During the active periods Dallas Dhu produced single malt whisky for the blending industry. Not many  distillery bottlings are known, but quite a few independent bottlings. On average, the Dallas Dhu whisky gets high ratings. Virtually no bottlings have been released since 2010.