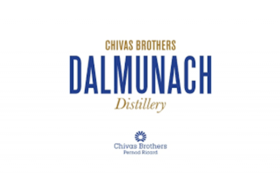 The Dalmunach Distillery is named after a pool by the River Spey which is close to the distillery. It was built by Chivas Brothers in 2014 on the spot where the Imperial Distillery was located not so long ago. The buildings are designed to blend seamlessly into the environment, including in the area's traditional architectural style. The distillery was delivered with 16 stainless steel washbacks and 8 stills. The first bottlings were released in 2019. Bottler Duncan Taylor regularly releases Dalmunach single malt in the series The Octave.