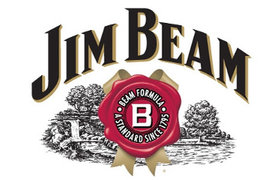 Jim Beam is the brand name for the bourbon and rye whiskey produced in the two Jim Beam distilleries in Kentucky. It started in 1795 when the German immigrant Jacob Beam sold his first barrel of homemade whiskey under the name Old Jake Beam. In 1933 the brand name of the whiskey changed to Jim Beam. Jim Beam's best-known product, the Kentucky Straight Bourbon Whiskey Batch # 1, in the well-known rectangular bottle, goes back to the recipe for that first barrel. Jim Beam is one of the largest bourbon producers in the world.