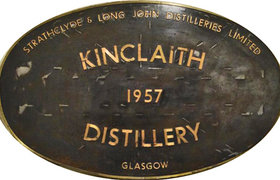 The Kinclaith Distillery was opened in 1957, making it until recently the last single malt whisky distillery built near Glasgow. It wasn't actually an independent distillery either. It was built within the grounds of the Strathclyde grain whisky distillery. Kinclaith has only been running for 18 years, until 1975. Also because the distillery only produced for blended whiskies and because it was very difficult for independent bottlers to obtain casks of this malt, Kinclaith is now very rare.