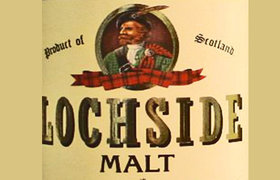 The Lochside Distillery was built in 1957 in the remains of a beer brewery, in the Eastern Highlands. The distillery produced both single malt and grain whisky for the first 15 years, then single malt whisky only. Lochside was closed in 1992 and early in this century the buildings were destroyed by fire. Only 1 distillery bottling is known. There have been quite a few independent bottlings, and they scored very well on average. From 2015 a few independent bottlings appeared,  and only one in 2018. Lochside whisky is becoming rare.