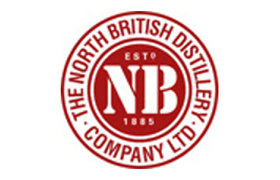 The North British Distillery was founded in 1885 on the outskirts of Edinburgh by three independent whisky blenders and traders who wanted to create their own grain spirit. Over time, the distillery has grown into a major supplier of grain whisky for the Scottish blending industry. Only during the two world wars did production stop for a while. Like all grain distilleries, North British also has very few bottlings of its own. For this brand too it has to come from independent bottlers.